This article will be in Hardwick Happenings and Dry Drayton News in November 2014. 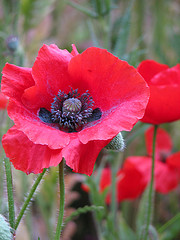 rance Sunday will be particularly poignant as we think back to the outbreak of the First World War.  In reflecting on those events 100 years ago, I recently came across these words written by General the Lord Dannatt, Chief of the General Staff 2006-2009:

“In this centenary year of the outbreak of the First World War historians will be reviewing once again the causes of the war, debating who was to blame for its outbreak, its bloody protracted course and its effect on the history of the twentieth century.  But these debates mask the real stories of that terrible war – the thoughts, hopes and fears of the ordinary people that fought in the mud and blood of the trenches, or at sea or in the air.  War is first and foremost about people, and people are individuals who have to make sense of the circumstances in which they find themselves.  In war this can be a huge personal challenge.

“Some may choose to argue… about on whose side God was in the First World War, but that is an arid argument.  God does not take sides between countries, however he is passionately concerned for the people who live in those countries and get caught up in war.  He made us, He loves us and he wants us to love him in return.  In peace or war God is interested in us as individuals.

“… we can do nothing better than place our hope and faith in God and in his Son, Jesus Christ.”  We won’t avoid the difficulties of life – the turmoil of the Great War or more contemporary challenges – but we can make a connection “with the peace, promise and real purpose in life offered by [our] loving Heavenly Father.”

From the Foreword to Hear My Cry: Words for When there are no Words, 2014, The Bible Society.

This site uses Akismet to reduce spam. Learn how your comment data is processed.